WEST, TX - An ongoing search and rescue continues on Thursday, April 18, in a small farm town north of Waco Texas where a fertilizer plant explosion and fire occured on Wednesday, April 17 in West, TX. 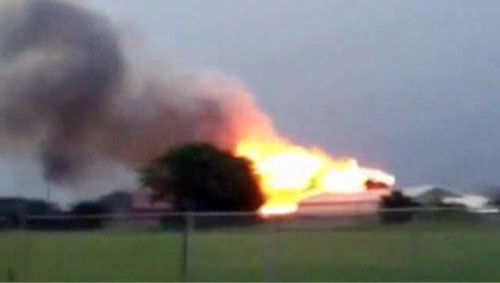 Massive explosion and fire at the West Fertilizer Co. in West, TX near Waco

The fire and explosion occurred around 8:00 p.m. on April 17, 2013 at the West Fertilizer Co., located at 1471 Jerry Mashek Dr in West, TX. The city of West is located in McLennan County, TX in the central part of the state about 20 miles northeast of Waco. At least 15 people were killed in the massive explosion and fire and more than 160 people were injured. The precise death toll remains uncertain. 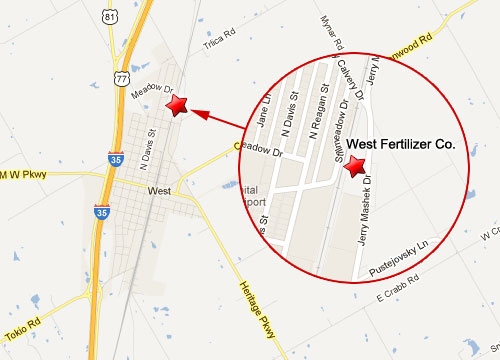 Map showing location of the explosion and fire at the West Fertilizer Co. on Jerry Mashek Dr. between Spring St. and Grady Calvery Dr. in West, TX on April 17, 2013.

Many first responders have been listed as missing and are feared dead. Three to four members of the West volunteer fire department are missing, among the volunteer firefighters is Joey Pustejovsky, who is a City Secretary for the city of West. Search and rescue teams are combing through the damaged buildings looking for survivors.

The sound of the explosion was so loud that it could be heard as far away as the Dallas area. The media reported that the blast shook the ground with the strength of a small earthquake and leveled homes, apartments, a school and a nursing home. Central Dallas is located about 76 miles from the explosion site, so that gives one an idea of just how powerful the blast was.

The day after the explosion, it was reported that "widespread devastation" could be seen. Glass from broken storefront windows littered the sidewalks and streets. Rubble now stands where many homes had once been and a brick facade was ripped away from a large apartment building by the force of the blast.

Watch raw video of explosion when it happened:

It is believed that ammonium nitrate was involved. Ammonium nitrate is used in the agricultural industry as a nitrogen fertilizer. Officials do not know for certain what caused the explosion but an investigation is currently underway.

An article at the DallasNews.com website covered the details of the incident

According to The Fertilizer Institute, a national trade organization in Washington, D.C., anhydrous ammonia was stored at the faciilty for sale to farmers.

A Nightmare for The Community

Gov. Rick Perry called the explosion "a truly nightmare scenario for the community" and said he had been in touch with President Barack Obama, who promised his administration's assistance with operations on the ground.

Authorities said the plant made materials similar to those used in the 1995 Oklahoma City bombing.

Erick Perez was playing basketball at a nearby school when the fire started. He and his friends thought nothing of it at first, but about a half-hour later, the smoke changed color. The blast threw him, his nephew and others to the ground and showered the area with hot embers, shrapnel and debris.

The explosion was like nothing I've ever seen before," Perez said. "This town is hurt really bad.